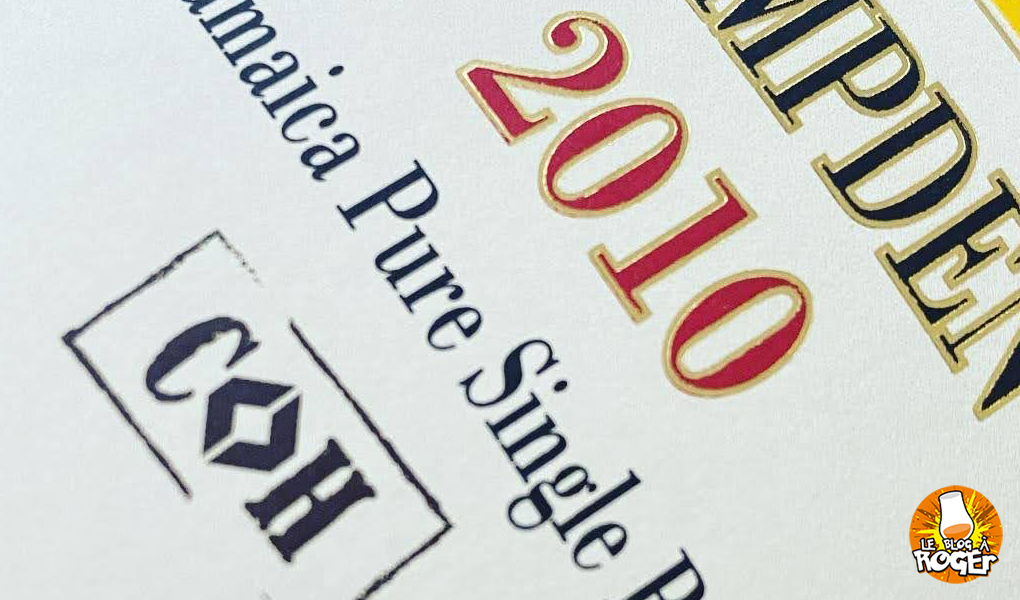 Well, Habitation Velier begins to accumulate a lot of different marks from Hampden … We are already at 5 if I’m not mistaken. After an HLCF, a LROK, an LFCH and the HGML of last year, here is how the C <> H (say C diamond H)) is coming with force in this summer 2020.

Coming from « Continental Hampden« , this marks is the most extreme before the famous DOK. It would contain between 1300 and 1400g / HL of esters, which can seem enormous compared to HGML which was already well typed. Afterwards, the latter was much more pleasant to taste than its HLCF counterpart of the same vintage and lighter in esters, but aged « only » 6 years on site and grading 6% more alcohol.

Here, we arrive at Hampden aged 10 years at the distillery, and as already explained, time is often the best ally for a Hampden. Oddly enough, we start on the other hand on a voltage closer to 70% than 60% … I find it a pitty not to have continued in this wisdom way, we will see what it gives to the tasting.

Last thing about this bottling, it seems that the availability is quite low … indeed, only whisky.fr and Spirit Academy put it on sale for the moment, and it turned into a real war waiting for the fans.

Impossible to know the exact moment when it was going to be proposed, but once it was done, 5 poor minutes will have been enough to make this bottling sold out!

I really regretted not having bought the HGML at its release, I must admit that when I found myself face to face with the possibility of buying it, I didn’t think very long and I said to myself: « we will see … « .

So here we are officially when we are going to see 🙂

The first nose is of course rather closed, on the glue and a slight almond paste side. The 68 watts are not particularly felt too much.

Over time, more acidic notes with lemon, pineapple, granny apple complete the bouquet as well as a hint of caramelized sugar.

The woodiness then appears, with a touch of light vanilla, a buttered side, nuts, red pepper and dry wood.

I don’t especially find too many touches of olives, there are but not excess. A slight anchoïade should also be noted. Same for the tagada strawberry, we smell a light harlequin candy but it is rather balanced.

Quite astonished, I thought I came across something much « worse » actually. It is of course very typical Hampden but it is fairly balanced.

Same, it’s surprisingly « sweet » in fact … far from being aggressive, it is of course lively but creamy and bordering on the voltage of the thing.

The aromas are also rather balanced, hear that it does not go completely in all directions … we find what we love at Hampden, namely the ripe fruit including pineapple and banana, a brioche side , the fat, red fruits, smokiness, vanilla, the bitterness of the nut and the oak.

Well I admit once again that I did not really expect much, but I am quite amazed in fact … as amazing as it may seem, I find this Hampden rather balanced, very funky of course but not as extreme than I would have thought.

So of course it is not the daily dram per excellence, but it is still much more pleasant to taste than the HLCF which must have been too young in fact.

Halfway between the HLCF and the HGML I would say … Too bad it really expensive for a 10 year old and it would be nice to get it at 62% as the last HGML.