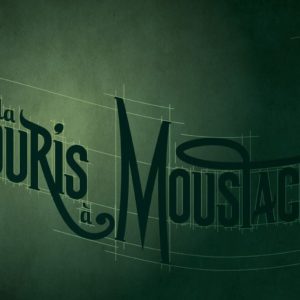 1979/2019, Roger Caroni is 40 years old! Well not really, but the guy behind this pseudo facebook well, and I wanted to make a small custom gifts. An original thing related to these 4 decades and this « small » passion 🙂

Velier’s 1997 Uitvlugt was the first « big » bottle I cracked for, I’ve decided that making a personalized replica of it would be a good idea.

Contact is taken with Thomas, the guy behind « la souris à Moustache » who is also a big passionate about spirits in general, but especially a talented graphic designer with whom I discuss regularly.

Hi Roger, I introduce myself, Thomas Caqué, 34 years old, I consider myself a self-taught graphic designer and a big fan of Rum.

I have always been attracted by Image in all its forms and more particularly by the print media. Hunger of knowledge, I also improved over the years, to various activities related to paper: Calligraphy, Origami and recently, Pepakura (I let you « googling » the term … ^^).

Today, I want to develop via my entity « le souris à Moustache », ambitious projects that are close to my heart.

Thomas is also a big fan of rums, from all origins …

Like many amateurs (or at least a big part), I started to taste rum, when one of my best friends offered me a « Diplomatico – Reserva Exclusiva – 12 years old » for my birthday, that should be in 2012.

I had to satisfy myself with this type of rums for 2 good years until my curiosity pushed me to read articles of « L’homme à la poussette » and « Durhum » on Demeraras, Caronis, Jamaicans and agricole.

This story began when we were looking for a way, Thibaut, (aka « Dédé Thib ») and I to thank our Italian friend who did so much for us the French amateurs …

Indeed, at the time (2014), it was much less complicated to find Demeraras DDL / Velier partnership at a decent price. It was even less complicated for him to find in Italy, cradle of the largest independent rum bottlers in the world.

Since an idea never comes alone and we arrive at the end of the year, always to thank him, but in a more personal way, I thought of a wooden Advent calendar where in every box, would be a tasting sample of rum or other spirits, offered by one of the 24 participants.

The project « Santa Pietro 2.0 » had as an interesting concept, the fact that Pietro followed each box of the month of December, without knowing what he tasted and by whom the tasting was offered to him (principle of the blind tasting) …

Finally, I mixed business with pleasure, trying to personify a bottle that is for me the GRAAL in the world of rum, the « Skeldon 1973 » to the image and personality of Pietro, because they were all 2 of the same year …

Having the prior approval of Luca Gargano, is born the first bottle of Rhum Dememara DDL / Velier « faked », the « Caputo 1973«

Last project to date, and no less, a replica for Luca himslef … project proposed by 24 lucky guys to thank him for inviting them to the Caroni Ceremony last april.

For this one, Thomas will have had 6 days …. Pressure? not at all, and the result is up to his talent!

But that’s not all, he was involved in another project related to his passion, the Rumaniacs logo!

It was obvious to me that at some point, I work in one way or another with this enigmatic character that is Cyril Weglarz, his way of thinking, his sharing, he is light years away from the business aspect of the rum world.

I worked with him, in the development of the logo of the website « Rumaniacs », library or database of tastings of Rums / Rhums / Rons made by a group of specialized critics, this to highlight and keep in mind. memory of rums forever forget.

On this project, Cyril was my referent, but my creation was to please the other 8 people including Luca « himself »!

So, back to my replica and its development.

No way for the artist to do this anyhow, then follows a discussion where he asks me some questions … You must of course stay in the canvas of the original, and thus change all parts of the label with information that makes sense. So there are still a lot of things to change:

We therefore logically imagined a 1979 Thirion carrying the mark AMG (initials of my parents) and aged 40 years on the continental climate Walloon.

The experimental side being put forward by the fact that I have a twins (Robert Caroni, but a little less known) …

All this will have taken a few hours of discussion, so that the project really pleases everyone.

Since « Caputo 73 », I had 1 to 2 requests a year. The principle is simple, either a person wants to offer this type of personalized bottle to another person, or she offers it to herself.

For me, what will be the strength of resemblance is the year of the person and therefore his vintage. Each year is also defined by a particular still.

You know like me that there are several types of mythical stills and ancient references to closed distilleries at DDL, Albion / Blairmont / Diamond / Enmore / The Good Intention / Port Mourant / Skeldon / Uitvlugt / Versailles ….

Taking the example of Jean-François Fagnant, who was born in 1972, luck has done things well, because there was only one possibility in his case (and not least) the Port Mourant 1972, wich gave a Port Fagnant 1972.

Personally, I like a lot this type of humor, it’s class and smart at the same time.

In your case, the problem is that there is unfortunately no vintage of the year 1979 (I also had to joke for the occasion) … So we left on your favorite bottle in Demerara and the choice stops on a 1997 Uitvlugt, or by inverting the « 7 » and the « 9 », we get the Thirion 1979!

The rest simply follows, each bottle is unique because people choose the information they deem necessary: ​​name, nickname, year, place of birth etc …

Just I want to point out here, because I’m asked quite often, the typography on the bottles Dememara DDL / Velier is paying. So I recreated myself the font from a very similar.

For Thirion 1979 as well as for all other bottles, the main problem is when I print the labels. It must be understood that it is « Home Made », I do not have this ability to print on paper « embossed », I do not know the exact colors … well, a real headache what!

As for the rounded corners of the labels, argh, it’s a very long way !

For my part, I received information during all stages of the project to discuss and if necessary change some things.

Last question asked, what do we put in? because yes, a bottle is good but the final goal is to crack it !

My choice fell on a Foursquare 2013, bottle that I sent to Thomas.

This young rum aged 3 years in the tropics has a color that could make you think of a long aging in Scotland for example, not far away with the concept of aging in Belgium.

Again, trying to approach as much as possible to the concept seemed important to me.

Finally comes the moment when the bottle arrives at home and the discovery of this cool project in 3D.

I take this opportunity to swing a small gallery with the beautiful and his model, it’s really as bluffing as you can see!

This experience has been really interesting and funny … it allows to realize how complex it is to reproduce a label, even at the pace as basic as demerara.