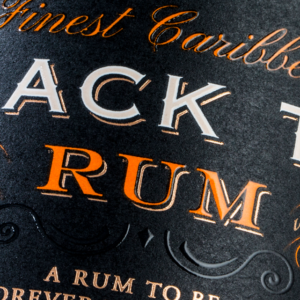 Many years ago, the sailors of the Royal navy received every day a little « sip » of rum, just to give themselves courage and « strength » … This tradition lasted nearly 300 years and finished on July 31, 1970, the date of the last ration was given on board English ships. This day took the name of « Black Tot Day ».

On July 31, 2010, an « original » version from the 1970s appeared on the market. It had been kept in a stone jar since December 1970 and under customs control. This version, « Black Tot Last Consignation » costs a lot and doesn’t seem to particularly be amazing. Personally I have never tasted it but it doesn’t really surprise me.

We see the strength of marketing with great packaging, a great story and a lot of buzz around this other « caribbean blend » …

This impression of sweetness remains rather tenacious, I imagine that the Demerara had to be « charged » during the assembly, but in the end it is a bit part of the concept too I think. It doesn’t shock me personally.

The only difference is the marketing force around this, we clearly feel that behind that, there is heavy and I imagine that the side « friendly and passionate blender » takes a hit but this should not be taken into account .