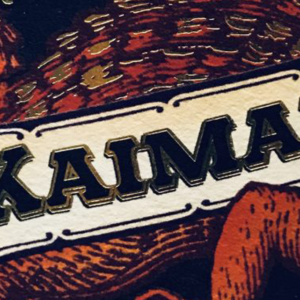 It had been some time since I had stopped looking at a blend of Florent Beuchet, boss of the dynamic Compagnie des Indes. Error repaired with this amazing Kaiman!

Surprising? yes little because making a blend of a guadeloupe rum put in barrels in 1973 with a blend demerara / Jamaica from 1993 …. the demerara being him a blend of Uitvlugt, Enmore, Port Mourant. The idea of this blend is really « what the fuck ?? ».

But hey, why not after all, Florent having already accustomed us to a lot of experiments !

The first nose rather transports me to the side of Jamaica in fact but over time, there are more notes from Guyana and mainly large Enmore.

A very soft nose that evolves from funky to heavy Guyanese … but while remaining fine and elegant. Nothing overwhelming or disgusting to report.

Soft and oily, there are slight traces of olive, fruit, vanilla and that side which I always equate to Demerara with licorice, cooked caramel, leather and molasses among others.

The Guadeloupe ? maybe this chic side to the rum that I often find at Courcelles but nothing more, and without knowing if it is a Courcelles or other.

The wood is more marked than on the nose with some toasted notes, but it remains light… astonishing, moreover, compared to the average age of the juices !

The finale brings us back to Jamaica with the pineapple to close the loop and a more typical bitterness of Port Mourant chocolate.

A blend strongly marked by Demerara, I think fans of this type of rum should greatly appreciate this bottling.

Guadeloupe ? Boh, it must be present but I admit that it is mainly the two English rums that I find…. Maybe it is in the balance and elegance of the juice, which is not always the case with a big enmore and a beautiful Jamaican 🙂

In any case, you had to dare the blend, I would say it is successful but on the other hand it is not given at all 🙁