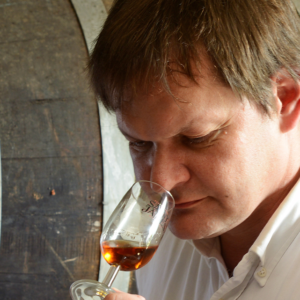 First meeting 2020, and not the least, I offer you a short interview with Marc Sassier, production manager of venerable rums from Plantations Saint James in Martinique and actual president of the AOC « Rhum Agricole Martinique » .

Can you introduce yourself and explain to us your path to get to this important position at Saint James? How do you go from viticulture to rum? 🙂

There is a common thread which is microbiology, studied from my certificate, then then passage from the laboratory to fermentations with the transformation of a raw material, sugar into alcohol.

Having obtained my diploma of agricultural engineer in viticulture-oenology and that of oenologist in Montpellier, I then had to leave for my military service in India with Canard-Duchêne.

The position was abandoned and I am then go to the DOM and this It was only a few days before that I knew I was arriving in Martinique.

And how did you « land » at Saint james?

Saint James brings together several historic brands of Rhum Agricole, including the legendary Bally rum. How do we manage this inheritance? Are Bally’s own processes (yeast, column, cane, etc.) implemented at Saint James where, over time, everything has « standardized »?

From the start of the transfer of production to Saint-James, Bally rums were produced respecting their identity. Then there was the buyout of the brand and stocks.

The big difference is linked to the climate, an essential component of our terroir, but here by the choice of a production during Lent (dry period) with very ripe canes and with dedicated degrees of pouring come out more fruity and suave rums which will give all its characteristics to the brand.

There is no standardization, on the contrary, Saint-James expresses itself with fresh cane for its classic white rums against ripe cane for Bally.

And in aging with a more predominant use of French oak as well as a different degree of barreling lead to a specific extraction of fruity notes and roundness for Bally, against empyreumatic and full-bodied notes for Saint-James …

We are entitled this year to a Bally 18 years old for Hubert Corman as well as a Saint James 2003 for « La confrérie du Rhum ». Can you tell us a bit more about these two productions?

Hubert Corman has one of Bally’s largest collection, in particular of old packaging, one of which is taken up by this new cuvée, brut de cask which was chosen from three choices offered between 15 and 18 years old to pay homage to the brand to his enthusiasts.

For « La confrérie du rhum », we had already made a selection with old Fleur de Canne, but this time it was also carried on a barrel stock. But with the particularity for Saint-James to have remained in oak barrels French… which was undoubtedly in his favor to be retained by Jerry and Benoit!

What is it like to let one of the oldest Bally cars on the market « go »? Are we talking about a Bally almost 19 years old if I’m not mistaken?

After more than 15 years in barrels all rums don’t have the same behavior and many are very tannic because the wood has taken over.

Very old rums with such ages are generally mixed for the Heritage vintage.

Here with an 18 year old (almost 19 to a few months) it is a total novelty at Bally, to also show that the cask strenght are well suited to the brand due to its natural roundness with here a very particular extraction linked to the 2000 vintage .

Apart from Velier last year, these things are rather rare in you, do you plan to continue this kind of thing or will it remain « one shot »?

The demand for specific dedicated series is growing, as in comics « one shot » and « reprints ». This however requires much more time than for large series and more attentive work to keep a maximum of product and its intrinsic qualities.

Our stock of more than 15,000 barrels allows us to make each cuvée in a unique way and therefore specifically dedicated, with for us a definition of the most natural cask strenght, namely the same barrel with the same rum since filling, without tools or reduction during aging.

But we’ll also be thinking about us next year, but that will be a surprise. For the rest it will be sparse, because it is also necessary to provide well differentiated prints and not to get lost in the multitude.

The year 2019 has been rather complicated by the cultivation of sugar cane in Martinique, How did it go for Saint James? Don’t you fear big worries for the future with the increasing demand for rum?
Shouldn’t plots be added to the AOC?

The absence of weed control solutions is our major challenge for maintaining the plantations.

Fortunately, the 2019 harvest was partially saved by one of the best alcohol yields in the past decade, but we were nearly 15% short. Our stock of barrels will allow us to meet the needs, but not too much to increase our quantities of casks for this year.

Distilleries have been responsible for the increase in surface area in recent years to meet demand. The A.O.C. area collides with areas not mapped in the past which may open up to new areas, which is why a total review of the area has been initiated.

The public inquiry has just been launched in Martinique on this revision approved by the National Committee of the I.N.A.O. It has not only extended areas hitherto ignored but also taken over old areas to better adjust agricultural land to the cultivation of cane to meet the qualitative conditions in A.O.C.

About the AOC agricultural rum, how do you see the future?
Do you think that some things will have to be changed or enlarged?

It is clear that the approach undertaken in 1973 and recognized by the 1996 decree is a success.

Thus we are usurped in various countries, recently in Mexico … where our A.O.C. is fortunately defended by the French state. But it is also the term « agricultural » which is to be defended, even in Europe as we have seen it sometimes.

Unfortunately European or French constraints are hardly applied or applicable to rums from other countries, often placing us in unfair competition and with the success of our AOC « Rhum Agricole Martinique », we are currently faced with a question of orientation, must it open or not the conditions of the AOC ?

So you have to be careful between « opening » the conditions and « freeing » the usage, because that’s often what we hear behind the word opening. Thus the word Martinique and its allusions, some of which would like to widen the field of application and vision, but this follows from the decree of 1921 or successive European regulations…

Thus, between the last change of position of the frauds to prohibit « Martinique » even in the address of a non-AOC rum although tolerated up to that point and putting « Martinique » on any product coming from or passing through the island there is a lot of room for maneuver.

We cannot demand strict protection on the one hand and in return for custom use the appellation, it is a balance to be found and on which depends the notoriety as well as the credibility of our AOC, putting « Martinique » on the bottle is not enough not to make it an « AOC Martinique agricultural rum ».

Recall that the conditions of the Specifications correspond to a description of the usual conditions of production and compliance with current regulations.

In fact, in 2009, we changed a few production rules (degree of fermentation limit, time before consumption, etc.). We are also considering some modifications, in particular on the traditional methods with « finishing » which had not been provided for in the European regulation for rums …

So basically, the famous HSE finish could take an AOC designation? How to manage this during blind tastings? Because when you taste the Islay Finish, it is not easy to detect directly that it is an agricultural rum (well, at my level :))

Blind tastings are there to characterize whether the rum is A.O.C. Martinique, so if they keep its organoleptic criteria.

But sometimes the finishing can be more marked so the jury can consider that the Martinique typicity is not enough present, which has already happened, so the rum is labeled in IG Antilles fr.

Besides, do you happen to have big surprises during the « elimination of products offered for tasting for the AOC »?

The distilleries since the establishment of the A.O.C. are increasingly vigilant about their products and postponements represent less than 2% of the rums presented (ie 100% of the rums sold, unique in France).

These are most often small process defects, sometimes too marked caramel and with wine finishes it is sometimes « volatile », otherwise without defects it may be too marked finishes.

What is your view on the current world of rum? The public is more and more interested in agricultural rum as well as real rums, do you feel that in terms of turnover?

The rum world is still buzzing, with a faster take-off of products like Capt’ain Morgan which are not rum but which surf with spices and sugar on identical markets, where in the world the diversity of the word rum is torn between pure cane juice and spicy… but it is true that we see the world of “pure cane juice” opening up, whose notoriety is increasing with productions across many territories yet unconventional due to the fact.

What do you think would be the greatest success of the Saint James distillery from which you have held this position?

Question that calls far from modesty.

We recently conducted a survey of our visitors, which revealed that the square bottle is our identity, while keeping a modern image for the brand, not a wrinkle after more than 250 years!

Personally, how do you taste your rum? What profiles are you looking for?

I always taste a pure rum, without lemons or sugars … moreover for the Gault & Millau I was surprised to discover very clear defects in commercial products, but as pleasantly as with very varied products and even in sugar rum, with organoleptic notes specific to certain companies.

I like to discover new products, but unfortunately at shows I don’t have much time and I prefer to do it quietly, rather than at no expense 😉

When I taste a rum, I expect from the product the magic of the invitation of the word « rum » of its raw material but also of the exoticism which is hidden there, of an invitation to travel.

We will still talk about my « purist » side, because it is not to drink a liqueur, a « sauce » or another spirit …

As for the rums, in white I will be rather agricultural and for the old I will have a preference for rums made in old cask, where the wood / undergrowth is filigree and not dominant, quite round and with a good complexity which gives a taste of « Reviens y » …