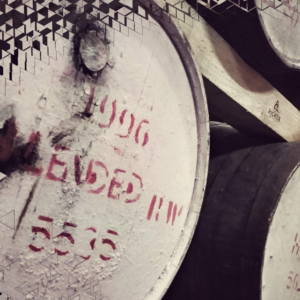 During my discussion with Luca last year, he mentioned a great Caroni Ceremony where he would make the next selections with the passionate of the deceased distillery of Trinidad …

He absolutely wanted to gather around the last casks these enthusiasts who also make Caroni as Caroni.

On the program then, tasting the whole 140 barrels remaining of Heavy Rum Caroni. 140 barrels in aging 100% tropical divided into 2 groups:

Everything has been repatriated recently in Europe to stop aging after selection. These will then be placed in stainless steel vats or dame jeanne to keep the essence of Caroni bottled by Velier, 100% tropical so.

Well, there will be 139 because one apparently broke …

Immediately after the official invitation received, contacts are made with 3-4 other geeks of Caroni to plan the route … Because yes, Cognac when we live in Belgium, it’s 8 hours driving, so it’s better to do it with friends.

So I will make a small stop in Paris to go and get two old acquaintances … which I had never seen in the end, to join the rest of the band at Château de Purygaud in Léoville.

11PM , we arrive on site and after greetings of use, a big linup is proposed to us … each participant taking a nice bottle to share with the rest of the team.

Result, sleep at 4 o’clock in the morning after beautiful passionate discussions around beautiful eaux de vie… an no exaggeration !

Next morning, wake up around 09:30 to join the place where the barrels are stored …

As soon as he arrived, Luca speaks passionately , telling us about the famous December 9, 2004 and the road traveled since to arrive at this fateful day, where the barrels will all be unloaded and put in tank stainless steel.

This day is history, it’s the last for real caroni in wooden casks.

8 tasting gang are made up to divide the work … Yes, 140 barrels, it’s raw if we must all taste

Our selection from TDL…

The first selection consists in sweeping all the barrels that have fully aged in Trinidad and select those that stand out.

For this, the 8 tasting gangs receive 1 / 8em of the totality of this stock in samples and will put aside those which seem to be above.

Then, they themselves are tasted by another tasting gang to validate or not the choices. From this second passage, only 12 barrels are selected for future single cask.

The rest will be assembled to feed the next 14 Employees.

On our side, we selected 3 barrels of 1996 with Nico, Jonathan and his companion Pauline.

These three selections are validated by the tasting gang of Luca who will finally have retained only 1.

If ever, this is the claims office for future buyers of this single cask who would be disappointed with the 3775 drum of 1996 🙂

Then, we have to validate the selections of tasting Gang 1, and we retained only 2 barrels of the 2000 vintage out of the 3 that Luca had proposed to us.

Yes, it’s relatively crazy to say that we have discarded a selection of Luca Gargano 🙂

Concerning « our » cask, notes of fruits, honey, wood, caramel for a generous and well balanced spirit convinced us !

Our selection from DDL

After this first big pass, little break to resume forces and then we will take care of stock that was stored at DDL.

They are often sweeter and generous than their « brothers » from Trinidad stock… why? No damn idea but it is often the case. The proximity of Enmore molasses shot perhaps ? 🙂

Meanwhile, we have offered Luca a special bottle, the Ruruki 1953 that we will filled with the different barrels set aside.

This unique bottling therefore corresponds to what we have proudly called:

So now, it’s time to do the same exercise as the stock of Trinidad, and always with joy.

Note that these barrels are the only ones with the original marks of Caroni. Indeed when they arrived at Angostura, all the marks were redone with a big TDL on the top.

DDL have not touched these Caroni, so we have the happiness to find the famous HTR or BLENDED on a white background, typical of Caroni

We inherited of a selection of « blended rums » from the 1996 vintage again. This is blends « light and heavy rums » having stayed in Guyana so.

We have not identified barrel that could be subject to a specific bottling.

Their super generous and round profile tends to become slightly disgusting with a lot of coco, caramel and dark chocolate.

They will make a superb base for a blend with some other slightly woody barrels I think … to be sure, I sacrifice myself and I did the exercise, it went really well!

What to remember from this memorable day, except this beautiful moment of sharing where Luca will have made us over happy amateur by allowing us to access the inaccessible … a day that will remain forever.

Thanks to La Maison & Velier and bravo!