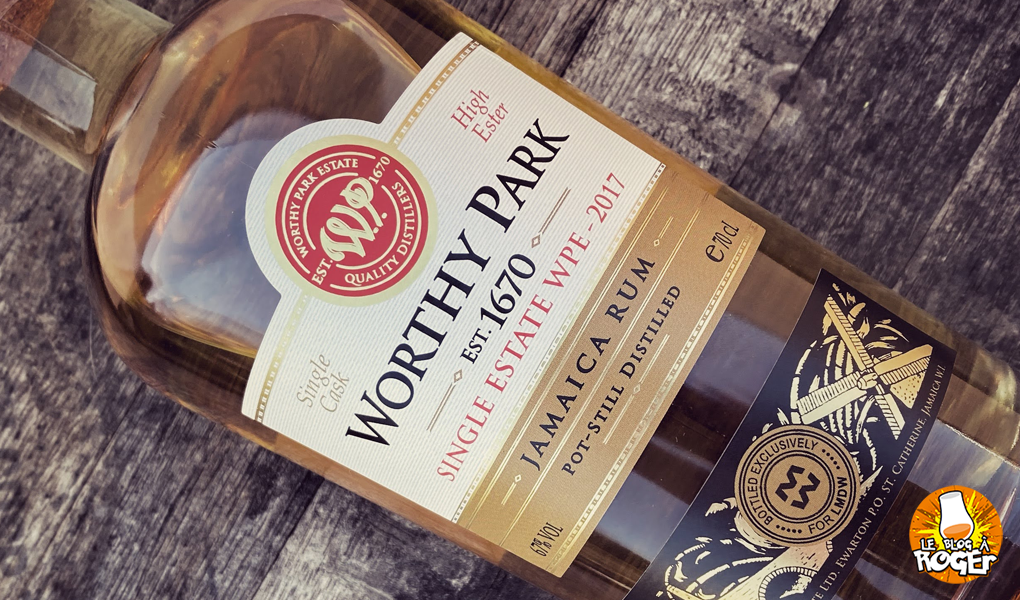 Back to Saint Catherine in Jamaica, in the lands of Worthy Park and its Jamaican rums with a confirmed character … Far from the eccentricity of a Long Pond or a Hampden, but Worthy Park is clearly an emblematic rum of the island. Probably one with the most commercial capacities, except Appleton of course.

Used to rather moderate profiles (for Jamaican), Worthy Park decided in 2017 to age one of its high esters marks: WPE. This mark is obtained after 2 to 3 weeks of fermentation with wild yeasts.

The version which occupies us here will then have been distilled with their still and put in American oak barrels having previously contained bourbon. The aging will have lasted 2 years and the juice will have been bottled exclusively for La Maison Du Whisky at 67% for just over 200 bottles.

It is, to my knowledge, the first official single cask of the distillery… So, it was not intended to hang around in LMDW shops for a long time, especially when a certain Serge Valentin gave him a 91 / 100 🙂

Having been warned by a post from Zan Kong, “Export Sales Manager, at Worthy Park Estate Ltd, Jamaica, WI”, I ‘ve directly checked the LMDW website and there, bingo, it’s possible to catch it a.

Last thing before putting my nose in the glass, Velier had made a special order in 2017 for a white rum WPE also for his Habitation Velier, so it could the same batch put in barrels … ?

Directly, I have this candy banana feeling! There is in this spirit a sweet side in fact, it is rather surprising and very greedy.

There is a lot of fruitiness with the banana so but also the pineapple and a fine caramelized veil.

I also find strong glue, a hint of olive, spices including vanilla, pepper and some freshly cut herbs too.

In fact, this nose seems not so far from white version, but with this more greedy aspect.

The 67% are however well integrated, I thought it would be much worse.

The mouth is necessarily lively, even too lively for a first approach …

The sweet, caramelized side is still preponderant and really encompasses the palate.

The fruits are of course always in the game, with the banana but the woody is however much more present.

It is clearly already more toasted, anise is not far away with even a little chocolate on the finish …

The finish is rather impressive despite the youth of this rum, the two years in barrel we have started to shape this spirit.

I didn’t think much of this juice before I tasted it, but in the end, it was pretty good. Not amazing and probably too expensive for a 2 years old rum but it’s nice.

We are really always on the freshness and the perfumes of white but already with a few tertiary touches.

The wood begins to take space and therefore leaves us with a juice between two ages. It’s interesting, but the 67 watts make it not the ultimate daily dram 🙂

That must reserve beautiful things in cocktail for those who know how to do it correctly (so, not me 🙂 ).