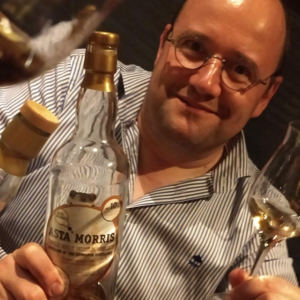 Today I propose an interview with someone who don’t need to be presented, but I will still present because I do what I want here: Bert Bruyneel from(R) Asta Morris.

And this interview, what did I like to do it! Because yes, rather than send questions by mail or phone, Bert simply proposed to spend an evening with him.

As you enjoy both life, no need to explain that this one was particularly nice 🙂

Bert showing me a restaurant and some bars in Antwerpen where we were able to discover crazy cocktails.

Everything starts at Bar Burbure where we directly taste the new and delicious Bielle 2013 of Rasta Morris and then we go to l’amitié for a meal to share … 6 small dishes to eat while chatting, hyper friendly.

The interview ??? ha yeah, it’s true, we still have a little bit of work and Bert offers me to go to BelRoy’s Bijou to discuss all this … Again, crazy bar with Liberation 2012 intégrale à la carte for example !

I leave you these few pictures before reading…

Bert, can you quickly explain to us how did you get this passion for spirits and whiskey in particular?

How did I get in this world? In fact, until 1994 I had never drunk a single drop of alcohol … that’s partly why my wife fell in love with me 🙂

At the time, a good friend who worked in a bar invited me to drink a Whisky. I reminded him that I did not drink alcohol but he insisted. “Whisky is a whole world, it’s a culture, you have to try!”

So I ended up enjoying a Jack Daniel Single Barrel, and it really was love at first sight!

The following weeks, we started to buy bottles to enjoy together and so on … we saw each other Monday night at one or the other.

At that time, I already had 17 bottles and then we decided to go to Islay in 1998/1999 … we had tasted a Bowmore, Bruichladdich and Lagavulin and we absolutely wanted to visit these distilleries.

But that was the time before the internet, so there was not a lot of news and when we got there we saw distilleries called Laphroaig, Bunnahabhain and others just as unpronounceable.

And there we all visited, we bought lots of references and we founded a club when we were at the bar of Port Charlotte Hotel … the first year we were 2, Carlos and me. We spent it learning just the two of us and then we went to 25/50/100 members and it still exists even if I’m not there anymore.

I still go there from time to time but I am no longer a member.

In 2004, I became a member of the MaltManiacs and then I started to select barrels for third parties, I also wrote articles and I animated tastings for importers …

I already had a VAT number to bill these items when I met in 2011 a barrel of Benriach 1975 that made me waw. I thought I could not leave it there, so I bought it and it was sold 249€ in the shop … I was very stressed but everything went after a week.

This is how I started the bottlings and I am now an independent bottler… it’s a beautiful meeting.

Did you see yourself 10 years later with all these bottlings ?

Someone would have told me, “Look what will happen in 10 years“, I never would have thought … I would have treated crazy and stupid 🙂

Just the name Asta Morris was a joke … a remake, I never choose a name like this but we are too well known to change 🙂

What is the most evolved thing in the world of spirits?

I have been in this world for 25 years and, in my opinion, the thing that has changed the most is somehow resourcefulness.

Carlos and I did everything ourselves … we climbed each step together.

Now there are forums, facebook etc etc and when I see some questions … I want to answer: “look! Tasted, learn …”

People now, they sometimes hesitate to buy a bottle if a blog did not give him 90 points … it’s a shame because it remains the taste of a person at a time. This is also understandable, because the prices are sometimes crazy. That’s why I try to keep my prices reasonable.

“Should I buy the Talisker or the Lagavulin …” I say, take both and taste!

For that, festivals and clubs are a good thing. There you can taste plenty of things without having to buy a bottle every time.

At first we bought everything blind … it was the trial and error as they say in English. You test, you are wrong, you start again.

You seem to like Sherry cask maturation, how do you handle that?

The biggest job was to select the right Sherry casks … so I bought at 8 cooperages, one each time and there are 6 out of 8 who ended up on the grill 🙂

2 of 8 left in my stock to put whisky and after that, I bought quite a lot in one of the two.

The differences between each barrel is anyway very important and I have to control that obviously … because I don’t want to put 500 liters of whisky in a barrel that is not good.

I put my nose in each sherry barrel that arrive in Belgium to validate it.

It lasts 10 seconds for each, but it is necessary, it is too crucial!

How did you manage to bottle not one or two but soon three Chichibu? It is still more rare to have so many times this privilege?

In fact it is quite simple, with Japan there is only one solution, to build a relationship.

In the end, it was they who actually offered me … they knew I wanted, I waited 18 months and then I was told, you can go.

I chose my first in November 2015 to have it in April 2016 … After it’s Japanese, they are not very extroverts, we must remain humble, calm and do not press or insist.

For example, during my second visit to their home and after selecting my second Chichibu, I ask Ichiro if there is a barrel of “Mizunara peated Chichibu” … and he answers me that yes, there is indeed a .

I then asked him if I could taste it … promising not to ask after to buy it. I really wanted to taste it.

He looked at me for 5 seconds …. in silence, after that he turns and takes a bottle and pours me 2 cl. It was fabulous.

But if there I said, I want it … it’s over, thank you goodbye and I never see Chichibu again.

As a collector of Chichibu, what do you think of the frenzy around these traffic jams and which make you vibrate?

First of all, what they do is top …. the quality is super correct. After the prices, is a 7-8 year old whisky worth that … probably not.

But it’s a matter of supply and demand … But that’s the way it is, life.

It’s also Chinese, Singaporeans etc …. so they want to pay, point. But Ichiro sells them at fair prices, it is the secondary market that goes in all directions.

What are your favorites one ?

Me on my side, I like the chichibu in bourbon cask, without any artifice because that is where we see the magic Chichibu … you probably will not see a Chichibu Asta Morris Beer finish for example.

In addition to Asta Morris, you have developed in recent years a range of rum called Rasta Morris, how did it happen?

I was at the Spa Rum Fair as a tourist … I was meeting with a guy for whisky, but as long as I was there, I thought I was going to taste something.

I came across a rum that I particularly liked … the next year I went to another one from the same bottler, from the same source and I noticed that it’s not the same anymore. I regain another and again it’s not so good, there was too much added sugar …

Suddenly, I told myself that I was going to try to do different … No sugar, no dilution, no coloring and no cold filtering, just a tap on the drum and bottles below

For my first, Caroni and Foursquare, they were in a lot of whisky barrels … in this, Asta Morris help me because otherwise, no one starts by bottling a Caroni course!

What are the novelties?

So there is a Jamaica that I can not name but that comes from the “Vale of Lluidas” … I think nobody knows where it comes from, it’s a real secret 🙂

There is also a Nicaragua and a Bielle 2013 and other beautiful things of the French islands … You’ll see, it will be famous!

The new labels of Asta morris present famous places of Brussels, will you make a continuation with other Belgian cities?

I think so … it changes a bit. But I want to keep the same layout because we always recognize Asta morris. One day a guy told me at a salon that my labels were ugly and that we had to change …

I asked him to look at the bar behind him and to find the Asta Morris, and there he understood, we directly recognize my bottles.

I am proud to be Belgian, I am neither Flemish nor Walloon, I am Belgian … the worries between us there is not really in the end, it is political all that.

we are live, let’s play a little with direct answers to a small question …

Bielle and for whisky, BenRiach

There are different styles … I love your style, you know it, but it will be Joker 🙂

If you had to choose only one bottle?

I put 99 in case I taste better one day but I really do not think it will happen.

The worst thing you have ever tasted?

It’s Hungarian sweet wine, and it was absolutely diabolical as a trick. And I remember, at Ophain in Brussels, when I was asked what to taste, I sent people to Signatory to test that. 🙂

Even the glass was dead … But it’s important to taste foul stuff, it also forms the palace.

Hoooo, I like both huh! But the carbonades is home 🙂

But I am convinced that opening a restaurant with all these Belgian specialties abroad, it will be a cardboard so it’s good. I’m really a fan of these dishes “brasserie” … (me too :))

Do you want to add something?

No no, have enough talk, there we will enjoy beautiful things Roger …

And the evening has continued, quietly with a particular cocktail in Mescal that I really surprised when I’m not too fan of this spirit!

Thank you Bert for this beautiful evening and see you soon!