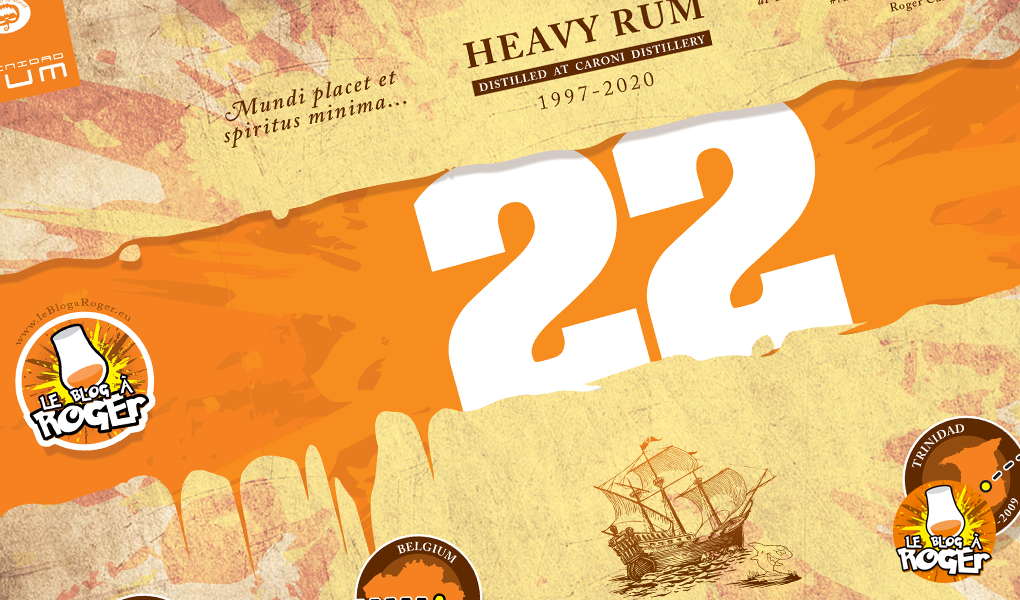 In life, there are certain occasions that you shouldn’t miss …. the kind of totally « what the fuck » proposals, where thinking would be a pure waste of time! So when I was offered a Caroni in the colors of the blog, I imagine that there is no point in drawing you a picture about my reaction 🙂

Once this proposal was accepted by all the staff working on this blog, the next step was to get up and ask a few « practical » questions. Why ? How? ‘Or’ What ? The vintage? The source ? etc., etc ….

And there Hubert, because it is indeed Hubert Corman behind it all, simply told me that a Caroni for the blog to Roger Caroni, it seemed implacable logic … which, let’s face it, it’s not wrong 🙂

Appointment is therefore taken for a tasting of the set of samples directly from Bristol Spirit for a great selection … Because yes, « My » Caroni comes from the second largest stock in the world of Caroni, Bristol Spirits in England. Mythical bottler that I really like!

From these 5 samples, we must select the future Corman Collins single casks and choose the Caroni that I like the most … The pre-selection having been made by John Barrett himself in his cellars.

The latter and Hubert have been working together for a long time, he knows what Hubert expects in terms of quality. So, the pre-selection is already of a very high level, that will avoid tasting too much « passable » stuff.

I will not go into detail on the whole selection, it will be done later. I can just confirm that he didn’t laugh at us to say it bluntly 🙂

The only one that was not selected is the Port Mourant, because it was « just » very good and not waw.

Coincidence, or ultimate politeness, Hubert admits to me preferring the 1998 … that the world is well done all the same 🙂

Potato on the cake, I even have the right to take care of the label and the design of the box myself … only instruction, it has to be big !

I called so my graphist friend to tell him about the project … and since we have been friends for a very long time, he cannot refuse me anything! 🙂

As for the identity card of the thing, we are therefore on a Caroni distilled in 1997 and aged until 2009 on the island of Trinidad. Then Bristol bought back a very large part of the stock, including this superb cask and left it to age on our continent until 2020. 22 years later, a Belgian blogger received 210 bottles at 58.5% of this juice and proudly typed this article!

We quickly find the markers of the famous distillery, namely a garage oil side, dirty and burnt with aromas of rubber, leather, hydrocarbon and chocolate.

The caramel is creamy and slightly salty, to which will be added candied citrus fruits, apricot in a compote, blood orange, pineapple.

The 22 years in cask have calmed down the rum, this one is limited creamy on the nose … well I don’t know if it is said ais that’s what I feel 🙂

Really the kind of elegance that I only find on the Caroni of some Bristol, the 1989 coming directly to my mind. And with me, that means a lot.

I think I had already fallen in love with this rum before I even soaked my lips in it.

The palate is marked by fine oak, powdered chocolate, slight bitterness due to long aging and also a fruity freshness.

If I had to describe this mouth I would say balanced because nothing seems to take up more space than expected. Everyone is in their place, without wanting to pass in front of the other for the final photo 🙂

We find the delicacy of marzipan, the fruity limit tropical with a hint of mango and pineapple coupled with citrus and apricots.

The oak is represented by milk chocolate, rubber, tobacco and more leather.

The long and elegant finish is sour and chocolatey ….

What do you want me to tell you … pwa that’s fucking good ! 🙂

So yes, it is not a « true » Caroni following the thougths of Luca … But for me, clearly it is a real Caroni, just worked differently.

The rum was distilled at Caroni, aged at Caroni as well as in English coldness for a double mastered aging. The word mastered has all its importance in this case.

Clearly, we feel that the years spent in the tropics have allowed the juice to assert itself, the years in Europe to calm down and become more complex in calm.

This rum is a true testament to what Caroni is, it is accessible in terms of tasting, complex without being wild … A daily dram with balls, shall we say 🙂

Last little thought, we really have to stop arguing between the Velier pros and the Bristol pros. It is stupid and it shows a radical lack of discernment for me.

There is beauty and failure on both sides, the most important being that they are both the only ones who have been offering Caroni on a regular basis since the distillery closed. Thanks to them, this one will exist a good bundle of decades more in time.

So thank you to Luca, Thank you to John …. well and Thank you to Hubert because without him, this opportunity to tell you about « my » Caroni would not exist.