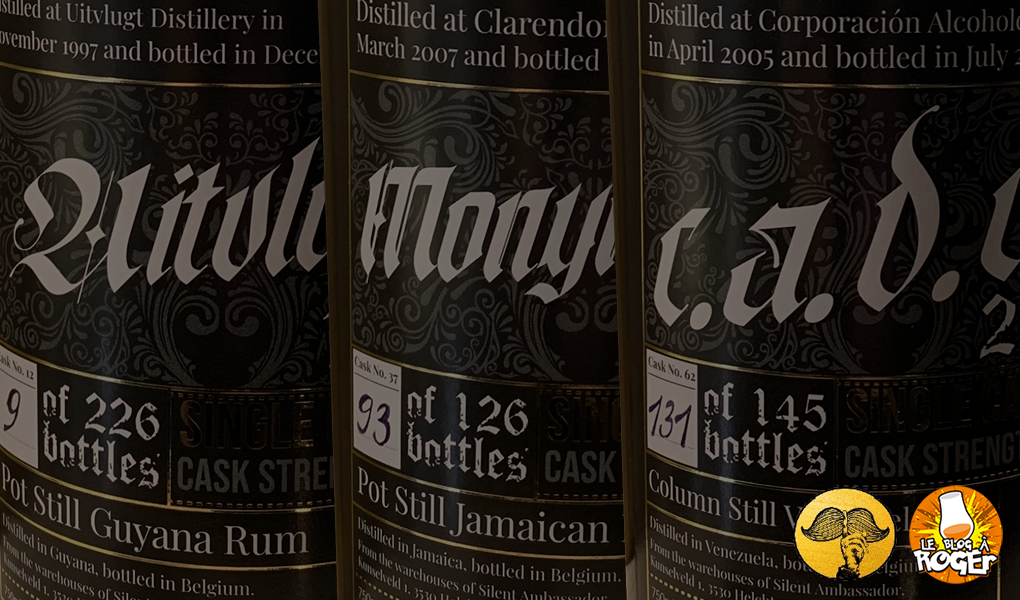 The birth of a new independent bottler is always a nice time to experience. I therefore suggest you through this article to discover the first 5 bottlings of Silent Ambassador.

Straight from my lovely Belgium, Silent Ambassador is almost a neighbor for me, because it is on Limburg lands that we have to look for its origin … More precisely, Helchteren actually 🙂

Wim Vanoevelen, passionate about spirits, is among other things the importer of Cane Island in Belgium and the owner of the Tensu store. In search of a new challenge, the logical next step was to bottle on his behalf and therefore Silent Ambassador was born.

A first Caribbean blend and then 3 « real » casks that we are going to taste is peeled this evening.

From this selection will be born 3 rather different rums and, you will see, there will be something for everyone.

Available in 2 versions, this cask will have been bottled half at the strength of the barrel, 60% and the other half reduced to 49%. The idea is nice, it allows you to see the differences made by a reduction.

Quite airy and light nose … there are vanilla, caramel, lemon hints and some fruits including bananas among others.

Nose more closed but with the same markers to which camphor could be added. Alcohol is not particularly noticeable too despite the 60 watts of the beast.

The palate is sweet, spicy, on dry fruity, nutty style and limits a sherry side.

The fruits are there too and a nice dose of caramel … nice for those who like this kind of profile.

The length is average, as often with this kind of ron.

Alcohol very well integrated in the mouth but what is « toooo much » 😅 arf the caramel is in force anyway on this version … So the thing is more monolithic in fact.

There is always some fruity behind it and some dried fruit including hazelnut … the second sip is already nicer, the palate has been informed!

Sympathetic Ron, without being exceptional but it clearly does the job … I am not persuaded of the interest of the full version, in the sense that fans of this type of Ron will go more towards light things in my opinion, but it may be an opportunity for them to see what a 60% ron can give.

It is well done in style for an affordable price for a 14 year old rum.

Same as for Venezuela, 2 versions are offered here including one at 64% which already scares me 🙂

Coming from Monymusk, this juice will have aged 12 years for the most part, if not all, in Europe.

Fruity nose, on an amazing pear as well as some spices including vanilla and a sprig of pepper. A brioche, buttered side is also part of it

It is rather light in alcohol, pleasant and fresh without being too closed.

The pear comes back again but with a more pronounced solvent side. The vanilla, nutmeg and pepper are still there, accompanied by a discreet olive.

Rather oily and lively on the palate without being too explosive.

We find the fruits but more acid, more towards the pineapple in fact. Pepper is also present and the finish is rather strong on the toast and pepper.

Rather not bad without being extraordinary, it is fresh, fruity and with slight oak.

Not too much traces of solvent or other large olives.

The mouth is rather violent, the watts are present and it stings quite well.

The markers are the same as the reduced but with a toasted finish which is more bitter on dark chocolate and tobacco.

A little too rough.

I quite like the reduced in fact, this pear is rather atypical and I find everything pleasant to taste …. especially for 66 €!

Full, even after 1 hour of large ventilation, it still bumps a little. To reserve for thrill seekers 🙂

Very PM profile, with lots of fruit, freshness and a rather unusual medicinal side.

Medium length on the other hand, the final can on toast and olive. Limits a Jamaican side in fact.

Nice PM, maybe a little bit of pep can be. I do not find the class of 21 years of Whisky Mercenary but it remains rather well done.

So, an « another » nice continental PM.